My mother passed away on December 15th due to complications after surgery.

It was a shock, even in her seventh year of cohabitation with an aggressive and poorly differentiated thyroid cancer. Mother, teacher, dancer, trader, daughter, human; she was one of the great ones.

I can't help but share this excerpt from her 40th Reunion Report which her brother Brick read at her memorial.

I would like to change the language we use to discuss cancer.  Over and over you hear, “So-and-so lost a valiant battle with cancer after fifteen courageous years of fighting.”  This is just not fair.  You mean, not only do I have to die, but I also have to FAIL??  Sounds like piling on to me.  I would prefer something like:  Clarissa Bushman passed away from thyroid cancer on January 1st.  She had six wonderful and fulfilling years during which she was able to spend time doing the things she loved most--Children and Family, Theatre and Dance.  She was grateful to have the chance to leave the world in slow motion and was certain that she would have the chance to watch over the lives of those she has loved.”

Get it?  I haven’t lost.  I am not fighting.  I am enjoying the time and the life I have left.  Truly--who really knows what will happen in the afterlife?  It doesn’t really matter because if the curtains close forever when the lights go out, you won’t be there to worry about it.  The only real drag about death is the dying part.

I thought I'd upload a few of my favorite recent pictures of her here, and have pasted my remarks from her memorial last Saturday below.

If you'd like to do something in her memory, call your mom!

We're also raising funds to support the rare cancer research which improved and greatly extended her life through Cycle for Survival. You can support (or join) our team by clicking here. 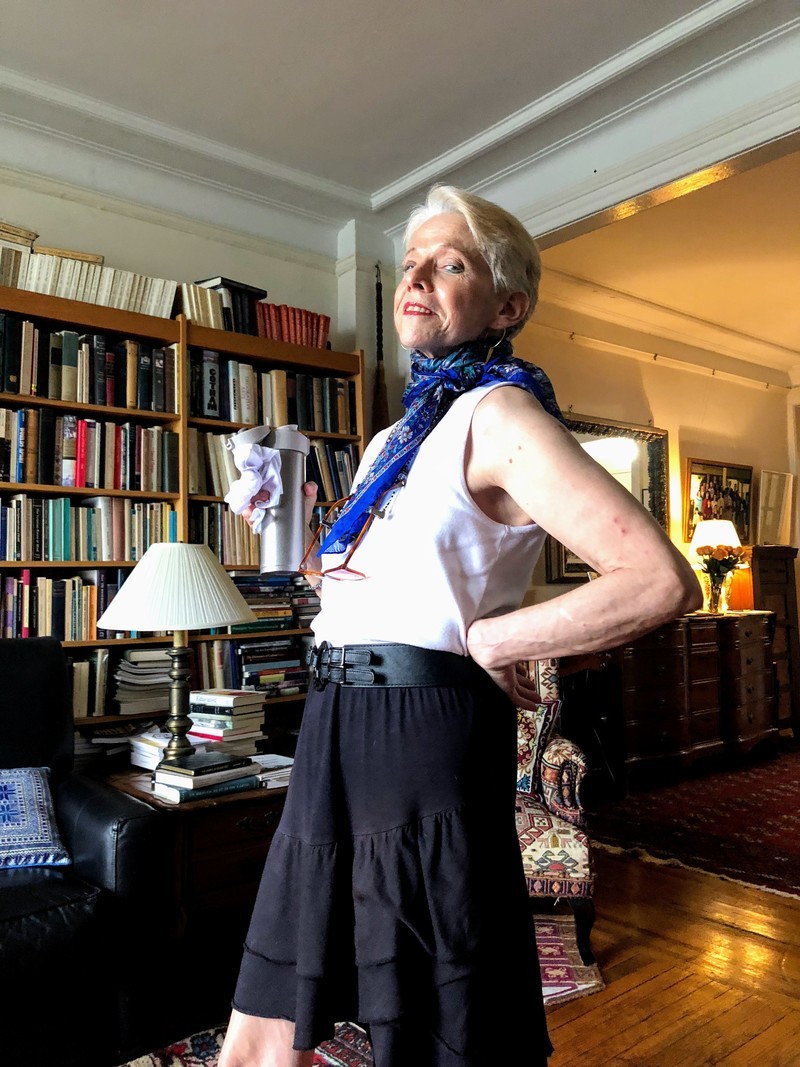 My Mom thought forty, maybe fifty people would show up at her memorial service. (﻿Around 500 people showed up)

There are probably forty people here who are related to her by blood. So I guess we showed her.

I know she would be surprised, touched, and perhaps a little triumphant to see all of you here today. I want to believe she’s sipping up a soup of adoration and singing along with the songs from just behind the back row.

I do believe she heard us say we love her, and I mean that barbarically. We love her like taking off tight shoes, or like fresh sheets love shaved legs after long, hot showers.

At one point I thought “we” was a family thing. But we who loved her are legion, and labels hardly matter. Hundreds of remembrances we've received share the sense she pulled some kind of light around with her. It seemed to strike everyone who saw it.

That was her aura: ambrosia with dash of anarchy.

But what’s tricky is that she always saw herself as a burden. Poorly differentiated thyroid cancer was not her primary affliction: She was a bad mom, a black sheep, and a big phony in her mind’s eye.

Never good or smart enough, she struggled to see the love which surrounded her even as she reciprocated it. So in the early days of her illness, the big question was whether she’d take any treatment at all. She felt fine, and said so often!

Would she see it as worthwhile to move into the parallel, volatile universe of the chronically ill for a chance at a few more years of misery? She had been an empty nester for years already.

Did we still need her? Would we miss her?

I can’t remember how many times she asked if I would speak at her memorial service convinced I would say no. The assumption, I guess, was that my love for her would be used up by now.

How could that be?

There was so much more to tell her. We’d only just gotten to know each other properly, and when you lose a mother you can really talk to, the practical upshot is that you have secrets again.

No-one can hear you in quite the same way, remembering and reminding as mothers do. No-one says “moisturize your neck!” Or can internalize your fears and somehow make them smaller.

I turned thirty this year, which is about the average life expectancy for a transgender woman in the Americas. I expect to beat the average, but the statistic has a way of looming in the background.

She heard me scared, thought, and set herself to learning about what I could expect in my life. She sent me articles and took me to shows: Torch Song, Kinky Boots, Angels in America. We saw the first trans actress originate a role on Broadway.

And in September she bought me a book: To Survive on this Shore.

There's an older trans woman on the cover standing in the middle of a Chicago winter looking warm. And that's the point of the book: pictures of trans elders and their stories. On the inside cover, she wrote “this is to remind you that there is life after thirty for you. I am madly in love with you. MOM.”

I know she had regrets because I found a list of them. She hadn't taken full advantage of Harvard, or structured her time dancing in NYC as she would have wished. Once, a student in a ballet class of hers offered to introduce her to someone who could have changed her life. Saying no sometimes still moved her to tears.

Fourth and finally are the years she spent “in a bottle”, which meant slept-in Sundays and delegated diaper changes. The list ended “of greatest sorrow is the years and years I lost of the lives of my precious children.”

We could never lose her all the way. She was always a standout, beautifully different in that she pumped her own gas, which is not a metaphor.

One of her fondest memories from her time upstate - my childhood - was speeding into our small town gas station in her little red jeep with a temporary tattoo of a tiger on her arm. She hopped out and pumped her own gas. The attendant was shocked: women just did not do that.

Sticking out was just her thing: she was a singing, dancing economist. Intuitive with bond math and Balanchine, she said early and often that her innate strangeness was a strength. And that’s fortunate, because she only weirdened with time.

One specific instruction stands out: whenever the coughing fits which came standard with her laryngectomy set in, we were not to acknowledge them. Eventually we barely noticed: they were medically harmless. But it sure looked and sounded like she was choking.

So, imagine the family out to dinner. We'd take seats and eat in the same semi-respectable way we do everything. Then it would start, and we'd hardly move an eyebrow. Her hacks and hems were an order of magnitude louder than the stage whisper she spoke in, and could go on for two or three minutes.

The purest proof that she was magic was that this became fun. And mom, if you’re really right there behind the back row, I hope you finally know. I love you madly, and always will.

Thank you all so much for coming. It really means the world.