This definition originated (as far as I can tell) from a 1996 paper by Jeffrey Frankel and Andrew Rose, and has also been used in NBER materials. The numbers appear to have been picked somewhat out of thin air, but it's a useful rule of thumb.

The recent run up in cryptocurrency prices has led me to wonder how many people have had their lives shaped by these sorts of events. If I'd lived through one, I think I'd be more likely to see the volatility, opacity, and other risks associated with crypto-assets as acceptable. They might even seem typical of currency in general.

The links above list a number of crises, but are only updated through 2007. I pulled Nominal Effective Exchange Rate (NEER) data for 112 countries from the World Bank's Global Economic Monitor to do a quick-and-dirty update. Only 85 countries had data available in 1988, but by 1995 all 112 were included.

Here's the number of countries in crisis each year. 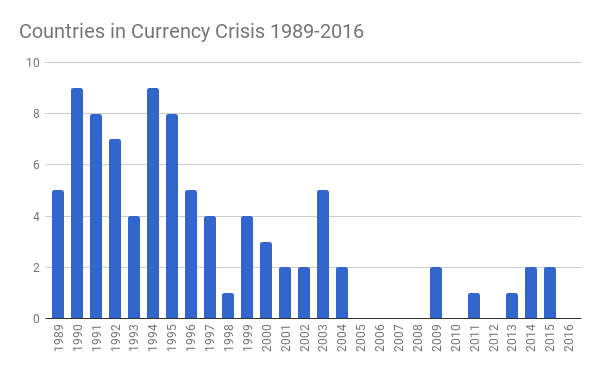 Here's the spreadsheet with the data.

Using this sort of rule is imperfect, since depreciations need to align with the 12 month calendar in order to register. For instance, Indonesia's 69% depreciation in 1998 doesn't count because it happened fast. 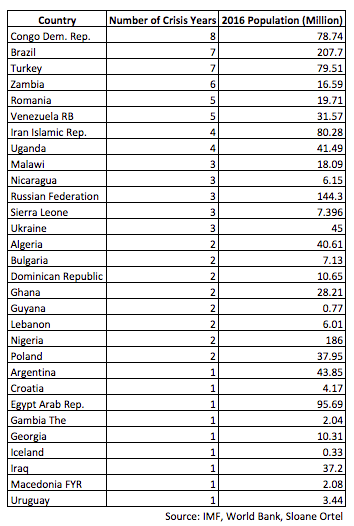 It would be difficult to establish a hard link between these events and openness to crypto-assets, because they have occurred much less frequently in recent years. That comes across in the first chart, but here is the YoY change in all of the currencies in the dataset. It's amazing how much things have calmed down. 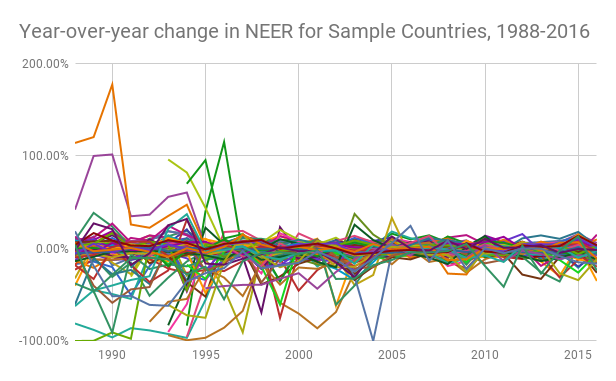 The contemporary picture is only placid compared to the chaos that surrounded the fall of the Berlin Wall, though. Since 2010, the percentage of countries in the sample that have experienced 10% or greater YoY depreciation has been rising steadily. 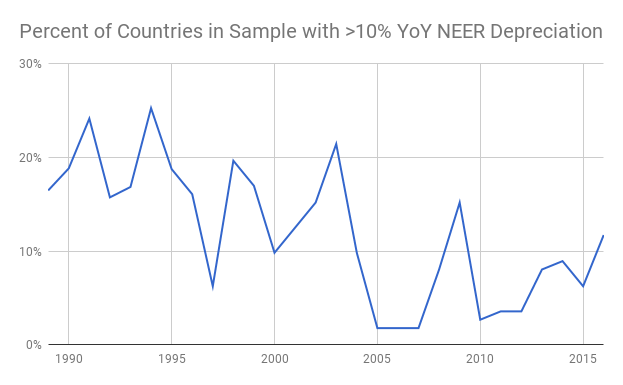 There isn't a clear link between this currency volatility and demand for crypto, but I think it's helpful to understand the dispersion of human experiences with currency. Most of the world's capital is concentrated in countries that have been insulated from these sorts of wild price swings, and perhaps as a result investors forget how frequent they are.

Most of the bullish outlooks I've seen for crypto-assets are predicated on eventually capturing a material proportion of global market share. That seems moderately more plausible (though in no way preordained) after this exploration. And certainly it's easier to see why there might be innate global demand for a new kind of money.